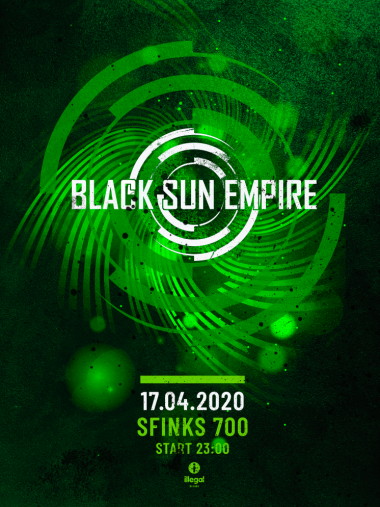 As you probably expected, Black Sun Empire will not play in Sopot on 17.04.2020. The event has been moved to a new date, which we are now confirming.

Purchased tickets remain valid for a new date, we strongly encourage you to keep them. Of course you can return the ticket at the place of purchase. Tickets from Ekobilet.pl can be exchanged for a voucher / ticket for any d'nb event that we will organize in the future 🙂
We will provide full info next week.

Black Sun Empire will set in Sopot on April 17, in Sfinks700! Classics of the Dutch team will sound in the Tri-City after a long break - you have to be there!

"Black Sun Empire began making music together in 1993, but it wasn’t until drum & bass reached its peak in the mid-‘90s that the trio truly found their footing. By thetime the Internet revolution opened a path for non-UK drum & bass acts to be fully embraced by the scene, Black Sun Empire had perfected their craft and began to deliver a distinct and different soundthat they could truly call their own. Emperors of their own self-built domain, Black Sun Empire’s reach and influence cannot be underestimated. The trio reign over a musical realm that now encompasses a roster of the most exciting artists that the heavier side of drum & bass has to offer and an events arm that delivers their vision directly to a growing, dedicated fan base. While you can be assured thatBlack Sun Empire will continue their expansion across the globe, it’s clear to see that they have already fulfilled the destiny which their namesake bestowed upon them."